As I've mentioned before, my annual Oct/Nov job is making the wigs worn by the Dame for the Mercury Theatre's Christmas Pantomime.  Last year was my third year on the job, and involved the wigs I'm most proud of.  Luckily for me, each year as my skill level has increased, so have the complexities of the designs.  So in the first year, thankfully, they were fairly simple whilst I was working out the methodology of creating the structure, and using fosshape and synthetic hair for the first time.  In my third year however, I could afford to work on something a bit more involved.

For 2015, the theatre chose to put on Aladdin, and so I was tasked with the making of six wigs for Widow Twanky, as well as a 'pagoda' costume that was added to the mix partway through.


This year I chose to use a different method, and so far the best method, for transferring the actor's measurements to the wig block.  To do so I first wrapped the top of his head, including all hairlines with cling film.  I then used layers of scotch tape directly over this to hold the cling film to the head, and continued to tape until the entire hairline and head were covered. I then took a sharpie and traced his hairline, which still showed from underneath, onto the tape.  I'd used scotch tape for this purpose as marker pens tend to rub off regular sellotape.  I also marked out the top of the head, CF & CB, and ear to ear over the top.  Once I had all my markings, I could ease the tracing off his head, and mount it on a wig block.

Once the hairline was taped onto the block, I padded out the rest of the head by cutting slits into the top of the tracing, and padding out the inside with strips of newspaper until the shape was completely padded out to match the tracing.  I could then tape the slits shut.  I also taped over all the sharpie markings so they wouldn't rub off during steaming.  I then sharpied over the top of this so that the hairline markings would get transferred to the fosshape when steamed.  I had to re-sharpie the hairline every couple of goes in order to keep getting a clear mark on the fosshape.

This method allowed for a really accurate head measurement, and I will continue to use it for future wigs.

I then created the fosshape wig base much as I've always done.  First I cut and sewed up a basic skullcap shape in the fosshape, and pinned it over the wig block, making sure it would cover all the hairline. 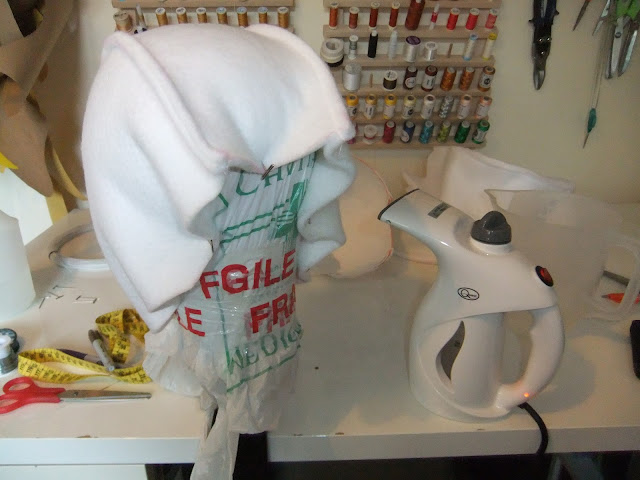 Then, using the hand held steamer in the photo, I thoroughly steamed the entire thing until it was completely snug around the head, and there were no soft patches left. 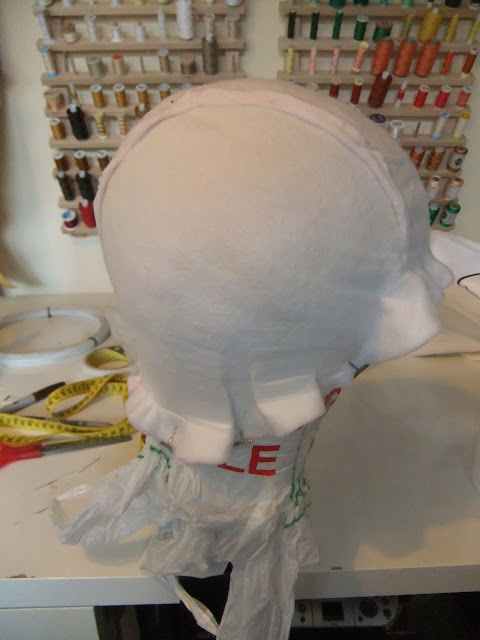 I could then ease this off the block, and use the transferred sharpie line on the inside of the fosshape to trim it to the correct hairline. 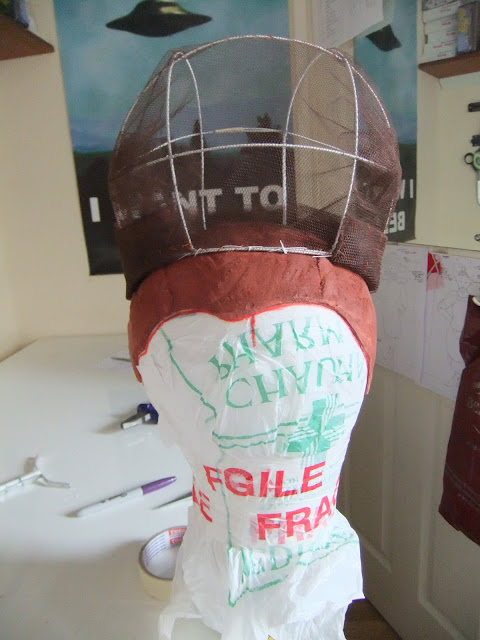 Here you can see one trimmed, painted with acrylics, and with a wire frame to hold up the large hairstyle pinned in place.
Posted by Kitty at 19:19