It's taken a while to get round to finishing this series of posts, but hopefully I'll be a bit faster in getting photos up for the Ball this year.  Oh yeah, I'm going again, in May 2016, and Becky is too, which of course means that we both need new gowns!

But more about that later, now back to May 2015.  Unfortunately, as often happens, I stopped taking photos as the deadline approached, so I don't have any making of photos for either gown, aside from the waterfall drapery patterning already mentioned. 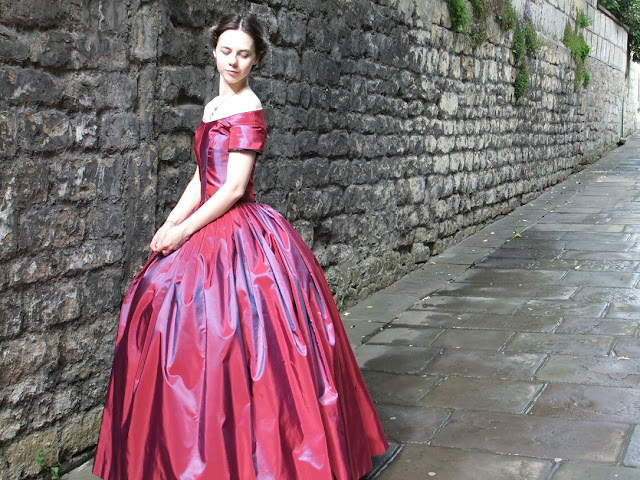 For my 1850s dress I found a lovely changeable magenta/blue poly taffeta (for £4p/m).  Being synthetic wasn't ideal, but it had a nice hand, and I loved the colour (and the price!) so I went with it.  Once again Jean Hunnisett was my go-to girl (for both of our dresses), and after umming and ahhing about trim for a while I kept it quite simple - just black lace along the waist and sleeve cuffs, and a little white lace peaking out at the top.  It closes in the back with hooks and eyes, which in retrospect wasn't ideal.  The lowered shoulders restricted my arm movement a lot, and I found that in trying to raise my arms to dance, the top couple of hooks came undone several times during the evening.  In future I would remedy this by adding a little elasticated panel to the shoulders, and stick to a lace up back opening. 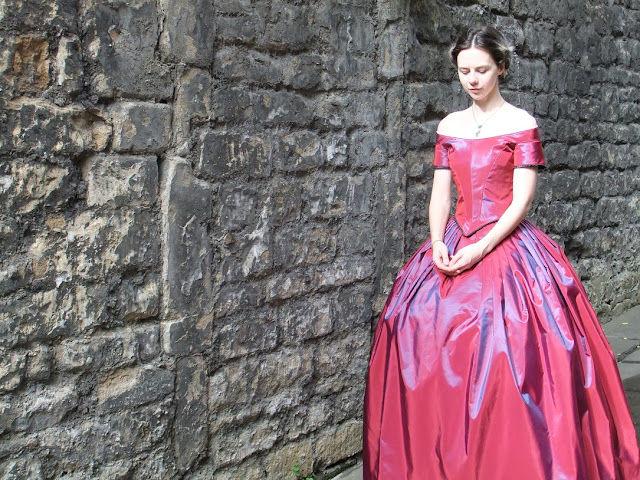 We arrived in Bath early afternoon for the dance practise session.  There hadn't seemed much point in paying for a hotel room as our parents live so near by in Bristol, so we turned up in costume, and whiled away the rest of the afternoon before the ball by wandering around Bath getting some nice photos of each other.

Becky did a good job of being friendly to any good-natured passersby who asked if we were dressing up as Jane Austen characters, while I tried hard not to grumble at their distinct lack of costume history knowledge. 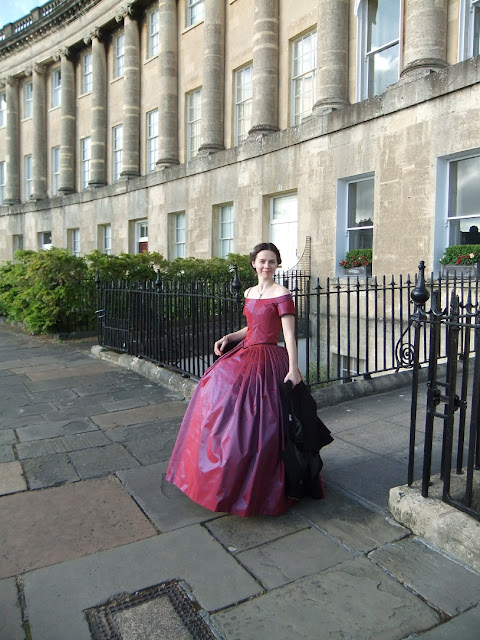 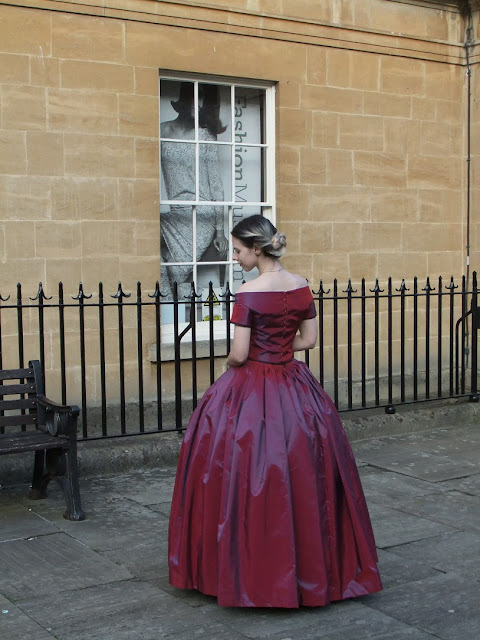 Becky's dress is also low on trimming. Partly this is due to running out of time, but it's also due to my tendency to lose motivation once the structure of a garment is done.  It would have been nice to do something more with the bodice of this one, but at least her skirt is nice! 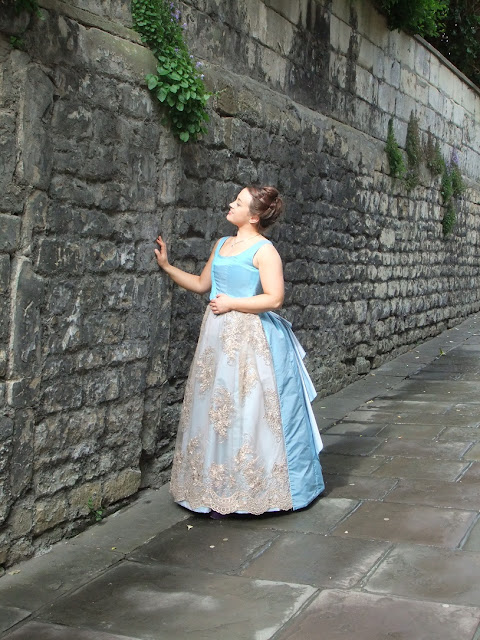 Her dress consists of an underskirt of silvery blue, with an overskirt consisting of a gold lace panel at the front, and the brighter blue at the back, with the drapery over it.  It has a back opening, and the waterfall is sewn to just one side, hooking into place on the waistband once the back is done up. 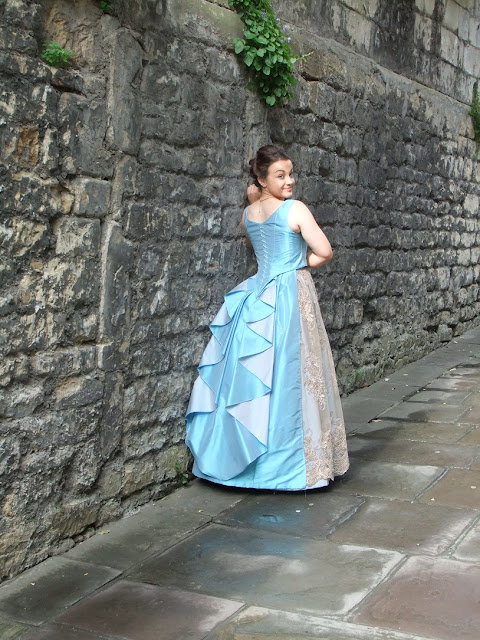 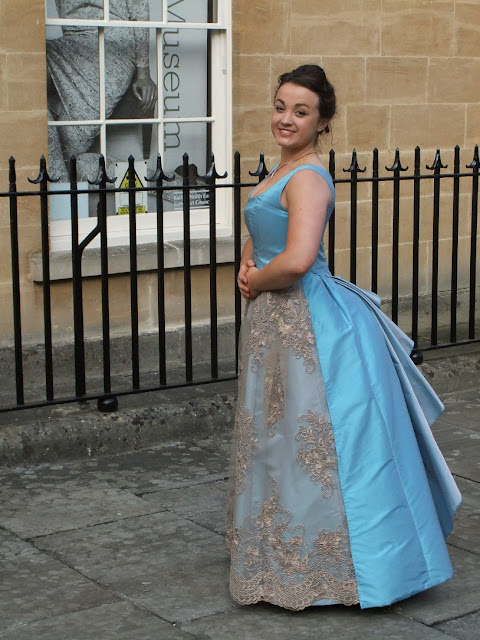 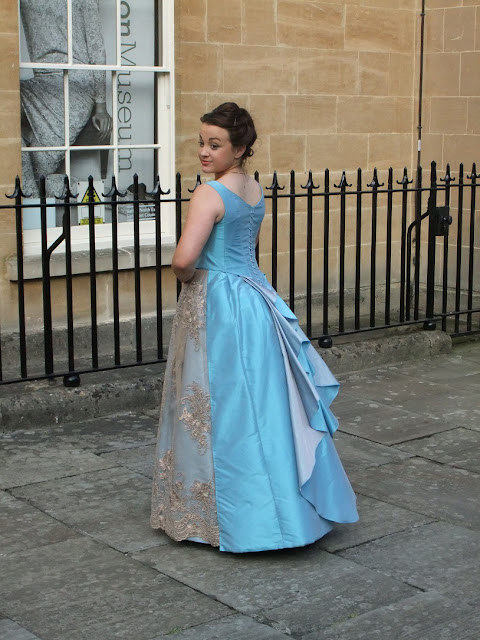 As much as I loved Becky's skirt, it proved quite difficult to take a photo that would show off both the gold lace and the waterfall at the same time - and without the wind blowing the drapery out of place!  Maybe I should have used a few swing tacks to keep it in position better while we were outside! 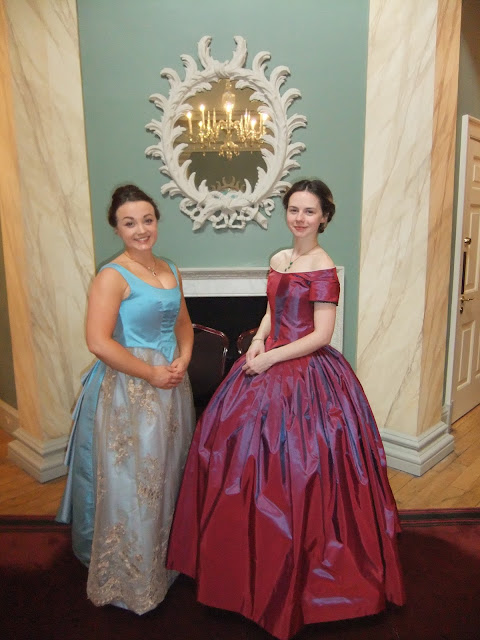 Inside at last!  I'm no stranger to the Assembly Rooms in Bath, but this was the first time I'd ever been to a ball there, and they fit the bill splendidly!  It was a wonderful evening, we met lots of lovely people, and danced the night away.  Having had so little experience of dancing, I had been a little apprehensive about what might be in store for us, but I needn't have worried.  With the afternoon practise session under our belts it was fairly easy to pick things up, and the variety of skill level within the group stopped anyone from feeling uneasy about forgetting a few steps. 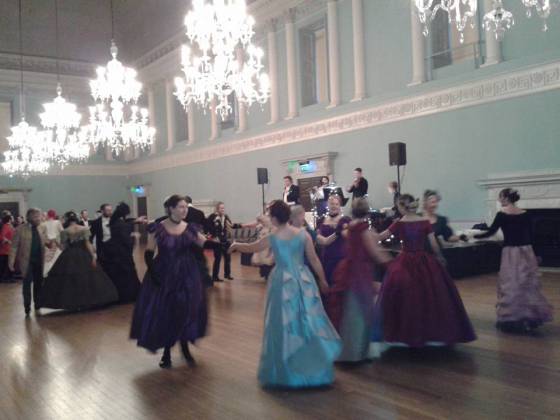 Both of us in action!  Photo borrowed from Izabela's blog, please go here to see her photos from the night. 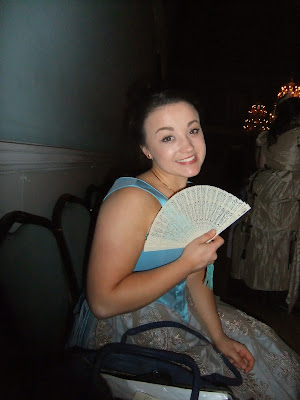 And Becky at the end of the night.  Many thanks to Prior Attire for hosting this wonderful event, we both look forward to the next one!

I think my favourite feature of the costumes for last year's Ball was Becky's skirt, which featured waterfall drapery down the back, and a gold lace overlay at the front.  I was inspired by this image for the back drapery, and managed to find some lovely (and very affordable) silk that was blue one side and silver on the other.

To figure out the pattern for the drapery I first did a small mock up in paper. 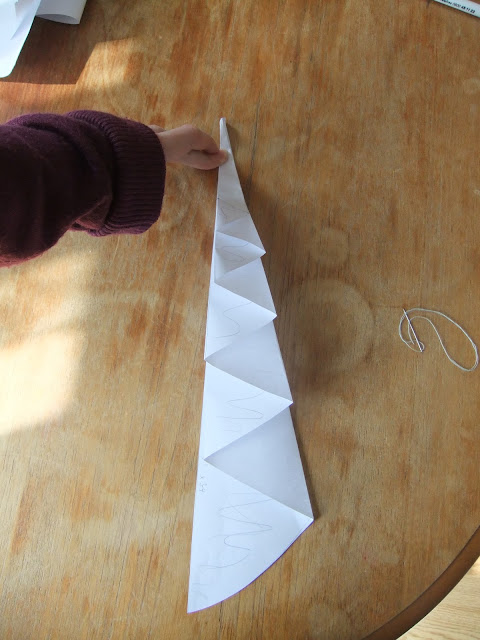 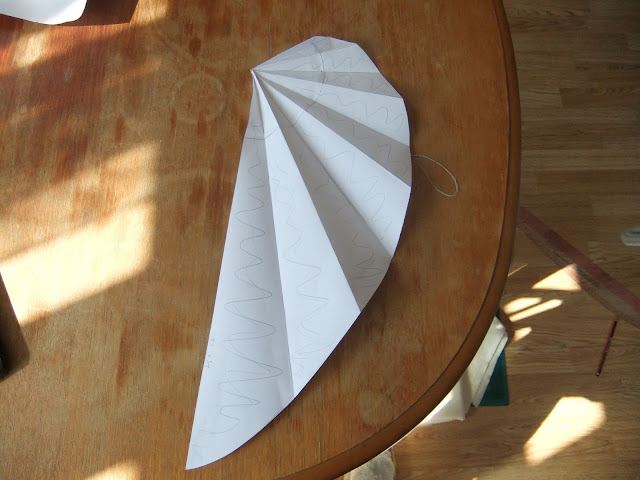 And here's a sneak peak of the toile version in calico.  Next post will be photos from the Ball itself! 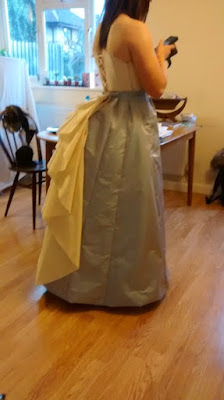 Once I was done with my own underpinnings for the ball, it was time to tackle Becky's 1880s ensemble.  The first thing on my list was a bustle, which I'd been itching to try for years. 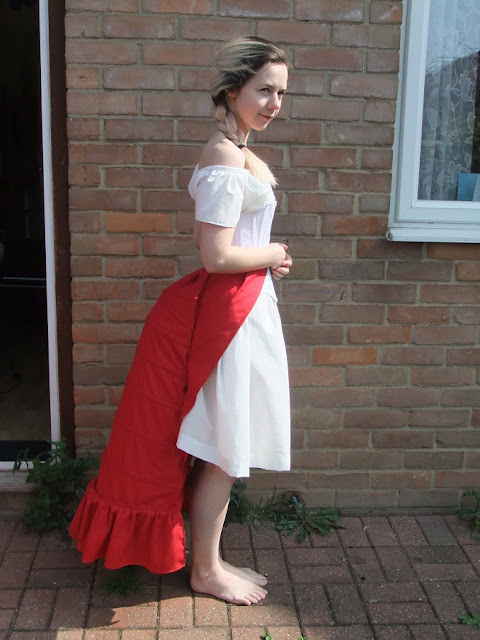 I used red cotton drill from my stash (it had to be red for a lobster tail bustle!), and used a combination of instructions from Jean Hunnisett and American Duchess.  You can see the latter's instructions on her blog here.

I also made her a coutil corset using Norah Waugh, and a ruffled petticoat to go over the bustle.  Once again Jean Hunisett's 'Period Costumes for Stage & Screen (1800-1909)' was very useful, but I also found Izabela Pitcher's instructions (here) very concise and helpful.  Izabela, you may remember, is the one who set up the ball in the first place, so it seems fitting to use her guidance in putting our costumes together.  Unfortunately the only photo I have of the petticoat is the somewhat blurry one below. 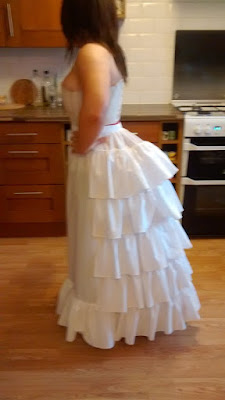