So, I never did get round to talking on here about the delay in Helga's grand debut.  Mostly because at the time it was too depressing, then afterwards I didn't really want to make myself glum by thinking about it too much.
To recap, I made Helga (see previous posts) to appear in the Spirit of the Sea Carnival in Weymouth, which this year was made to coincide with the Olympic Torch Relay to celebrate its arrival in Weymouth.  Unfortunately, when the day came there was such torrential rain (literally, there were flash flood warnings all over the South West that week, it wasn't messing about!) that the parade had to be cancelled.  This was gutting for everyone, especially the organisers who'd put so much effort into making it happen in the first place.  And it wasn't just me and the other 3 large scale costume students that had been working for months on it, there were a group of 2nd years that had been leading around 800 or so school children in making costumes for themselves to wear in the parade.  It sucked, basically.
Anyway, flash forward to September 9th and it was finally Helga's chance to shine! (and luckily the sun did too)  This time round we were there to mark the end of the Paralympic Games, and it was fabulous!

There was a last minute switch around with the performers, since my fellow costumier, Immie, who was meant to wear it, no longer had an actor to perform in her own costume, and wanted to wear it herself.  Luckily Gabby stepped in, and I couldn't have asked for a better performer!  One thing about Helga is that she gets heavy.  I tried to make her out of the lightest materials possible; plastazote foam and pvc pipes, but even so, after an hour or so you're going to really feel the weight - especially with the coastal winds we had to contend with as we were going along the promenade.  But Gabby was an absolute trooper, not only did she look the part with her bright green hair, she battled the wind without complaint and posed and smiled for photos for all the crowd.  And wow, the crowd!  I have never had so much adulation in my life before.  I'd been put in the procession as a motivator, been given a costume from our stockroom to wear, and put next to Helga/Gabby to be on hand should anything go amiss.
It meant that I was right there to hear all the praise and see all the excited pointing fingers and variations of "Oh my god, it's the fish from 'Finding Nemo'!"  Not only that, but because we were right at the back of the procession as a kind of grand finale, the crowd would all cheer as we passed them by.  I tell you, it made all the blood, sweat and tears that went into making her all fade into insignificance.  I definitely want to do Carnival again, if only for the 2 hours worth of ego stroking at the end of all that work!
Anyway, photo time: 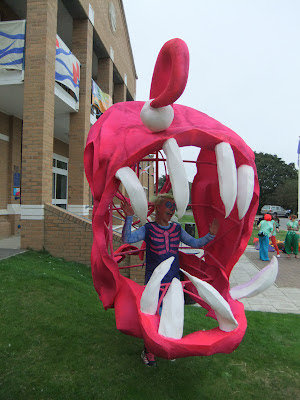 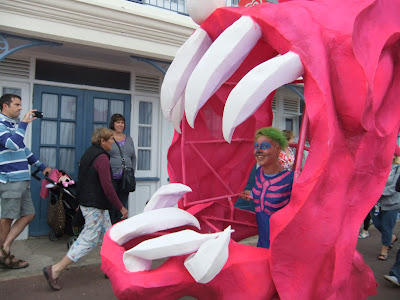 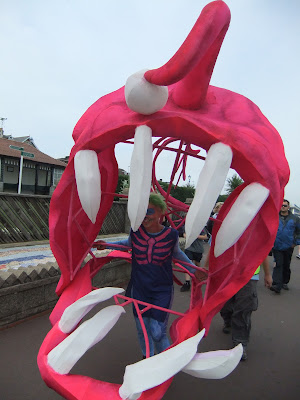 And some I nicked from the Moving Tides Procession facebook page: 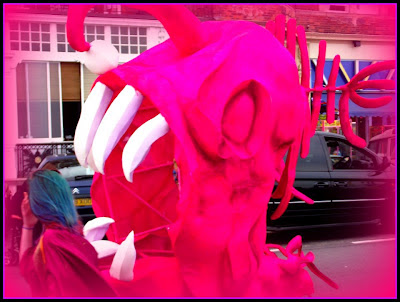 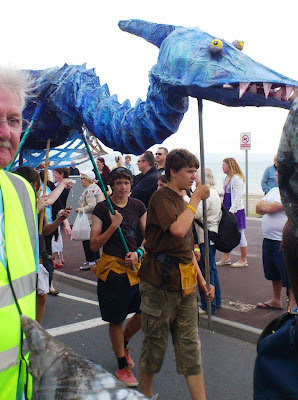 Ok, so in my previous post I probably somewhat exaggerated the secrecy involved in this project for dramatic effect, but the Athletes Parade has been and gone now so I’m free to post to my heart’s content.  For those who don’t know, the Athletes Parade was a big event in London to mark the end of the Olympic Games, in which all the British Olympic and Paralympic athletes paraded by on floats, various important people made speeches, and the Red Arrows flew over Buckingham Palace trailing red white and blue smoke to mark the occasion.  All very nice indeed, however, the highlight of the event was clearly the two lion puppets based on the British Olympic Association &British Paralympic Association logos that headed up the parade.  Obviously.  And I am of course in no way biased by the fact that I helped make them.


Aren’t they fantastic?  They were built by Kinetika, with Tony Mason and Iola Weir leading the make, and I was lucky enough to get involved for a couple of weeks in their Stratford studio.  I’d previously met the guys from Kinetika when they came to my university to help out with the flag-making for the Weymouth procession (more on that later!) and they were able to advise me on Helga’s construction too.

Working on the lions was really interesting.  It’s amazing how creative you can be with quite simple materials.  The frames for the lion heads were made entirely out of fibre glass and aluminium rods bent and bolted or taped into position.  These were then covered in fabric, and mounted on a purpose built backpack to be worn by the performer.  These were built along very similar lines to the backpack I made for Helga, except that instead of plastazote foam heated and moulded to echo the contour of the back, aquaplast was used in its place.  This was a very nifty material, quite rigid and plastic-y at room temperature, but when you heated it up in boiling water it would become quite limp and flexible, and so could be moulded over the back of a mannequin, returning to its original rigidity in 5 or 10 minutes. 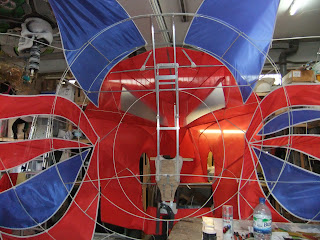 The manes that flow out behind the lion heads and are held up by other performers were a massive job in themselves.  First getting the acres and acres of fabric all cut out, then binding it all with white bias binding, then roding it all up with fibre glass and nylon rods.  Knowing which rods to use seems to be an art form in and of itself, a whole ton of difference will ride on whether you’ve used a 3 or a 3 ½ mm diameter rod when it come to the movement of the mane in the end, and knowing which ones to use seems just to come with experience.
I thought I’d leave you with a few photos of other things that grabbed my attention from Kinetika’s studio whilst I was there. Enjoy! 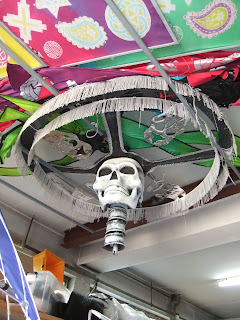 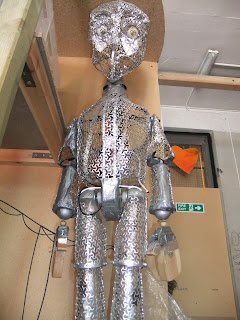 Next post:  Weymouth Parade (Helga’s debut!)
Posted by Kitty at 01:40 No comments: