Here's the design I've decided to go with for my dress, as well as a few other ideas I had a play with along the way.  Typical me, I've gone for the most complicated one there, but I've fallen in love with the criss-crossing panels and the way it perfectly works with the zigzag waist.  It also reminds me a little of the sunbursts that Sarina was referencing at the start of the project, so that's always a plus! 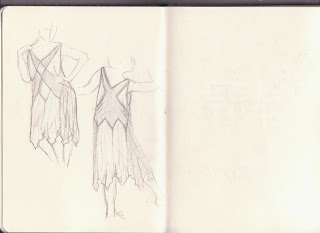 Of course it does mean that my ingenious plan to cheat bias cutting by keeping all my sewing lines on the straight grain has been scuppered somewhat.  Never mind though, I always like a challenge!  Making sure these seams are immaculate is going to be one heck of a job..
I haven't yet decided whether to use the same design on the back of the bodice or to possibly get rid of the silk diamond shapes on the back, so theres just the crepe, and the draping silk sides - as in the drawing.  We'll see how I feel after I've gotten the front sewn up. 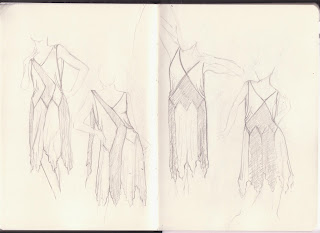 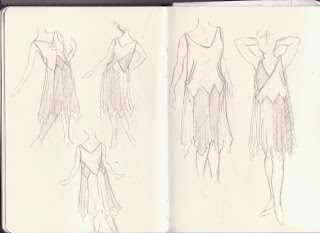 I found some gorgeous fabric to go with the silk today.  I went up to Birmingham with my mum and my aunt and a lot of fabric-buying ensued!  The stuff I found is a really lovely drapey fabric that really compliments Sarinas silk.  It has a slightly more 'camel' tone to it, and a crepe-like texture that's fabulous next to the smooth sheen of the silk.  I'm not positive as to the fabric type, but I'll refer to it as crepe from now on for simplicity's sake.  It was only £7.99 a metre too, which was fab, considering I would have been wlling to pay upwards of £15 for a good quality fabric.  I ended up getting about 6 metres worth, so plenty to play with!

I'm now working on adapting the dress design so that the two different fabrics mesh well together.  It's proving quite a challenge to work things out so that I don't need more silk than the 2 metres I actually have.
Posted by Kitty at 06:32 No comments: 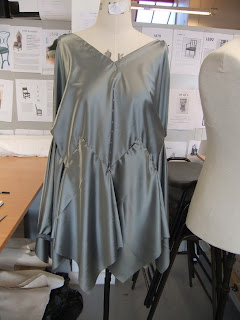 It's not completely sewn up, but you get the jist.  Generally I'm happy with the shape.  The squares need to be larger though, as it's too short, and the drapey armholes need some work too.  I've also come to the conclusion that there's too much fabric in the side skirt panels, so I'm going to cut a quarter out of the square when I do my final piece.
The neckline also needs a different finishing, as the slipstitching from the bias binding shows through on the right side of the fabric.  Will have to mull things over.
Posted by Kitty at 14:33 No comments:

I've gotten to the point where I'm happy with the basic design in 1/2 scale now, so I'm going to scale up the pattern and sew it in full size this week.  I'm trying it out on a greenish-grey silk first, as a sort of toile, before moving onto the nice expensive silk Sarina wants me to use for the final piece.  We're not certain exactly what we'll do with it though, as she only has two metres, and I've managed to design it with a masses of fabric in the skirt.  She has some grey/silver silk that we might be able to use with it, and make the tonal contrast a feature.
For the time being I'm going to sew up my toile, and then we'll have a better idea of how much fabric's going to be involved.  I had intended to use a crepe back satin for my toile at first, but Dexter was concerned that it was too heavy a fabric for all the fullness at the sides, and would make it look clumpy, so I've opted for the green-grey silk instead.
The other issue we'll have to look at when the toile is done are the open sides. At the moment, in 1/2 scale, they are open right down to the waist - which is a nice feature, but maybe not appropriate in a wedding dress.  I talked about possibly making/sourcing a matching slip to go underneath, and Sarina also suggested that a couple of little buttons either side might work too. But once again we'll wait until I've got the toile sewn up before we make a final decision on that.
Posted by Kitty at 14:26 No comments:

I've just gotten back from a week's work placement at Les Mis, hence the lack of updates on how Dance Waves went.
The final dress rehearsal went very smoothly from a costume standpoint.  I arrived at Jacksons Lane Theatre at midday on the 28th March, and handed out the costumes I'd taken away with me to alter.  The reinforced seams held up, and we didn't have to deal with any new rips for the rest of the day.  Kaaianu's underarm gussets made a great improvement to the ease of her costume.  It was now slightly baggy just around the armhole, but this was a vast improvement on the tightness of the week before.
One of the parents requested that we shorten the tiger ears her daughter was wearing so that there wasn't so much weight causing them to slip, so I cut them down to size and sewed them back on to the headband.
We were still having issues with some of the ears coming off during the dancing, so Jodie and I went out and bought some kirby grips to keep them in place.  We wanted 4 grips for each child so they could be placed either side of each ear, so for the 38 children that required them we bought 135 (with a few spares).
The other problem that we dealt with was the horse ponchos.  The hoods kept falling off as the children ran round, so we needed to tighten the neck fastening.  We  did this by pleating inwards to the side seam either side of the fastening.  Our first thought had been simply securing each side with a safety pin, but we were both concerned about the safety hazard of pinning so close to the kids necks, so we opted for a few securing stitches instead.
This also meant cutting a new slit either side of the poncho for the childrens arms, as the old ones had been brought too far forward by the alteration at the front.
The show itself looked great.  There were a few mishaps with the music, and I noticed a couple of tiger/lion hybrids (Jodie and I weren't involved in the dressing so there were a couple of mix ups) but it all added to the overall charm, as the younger kids were all clearly bewildered by the whole thing anyway!
Posted by Kitty at 02:15 No comments: