And thus, 6 months after Panto finished, I'm finally rounding off my Aladdin series with some photos from the show.  The Mercury ended up selling all the costumes on to Salisbury Playhouse, so if you fancy catching them in action you can do this Christmas as well!

I was really lucky with photos this time, unlike in the previous year when the Slosh wigs were the only ones that got photographed onstage.

Our dame, Ash, was really lovely to work with, and I'm happy to say that he'll be returning for Dick Whittington this year, so no need to alter the padding on my wig block - score!  I'm also especially pleased to have been asked to take over the making of all the Dame costumes in addition to the wigs for this year's show, so I'm really excited for that, especially as I've loved the costume designs I've seen so far.

I've actually already made a start on Panto this year.  Whilst in previous years my wig making schedule was confined to Oct-Nov; this time I've been asked to do a lot more costume work.  I'm currently working onsite until the end of August, and have already made good headway with the Ratty King and Idle Jack costumes.  Next week I'll hopefully get on to figuring out how to make some rat headdresses/masks...  I quite like the idea of giving varaform a go, as that's one thermoplastic I've yet to try.

September through to the end of November I'll be working on Dame (at home, rather than onsite) so I'm going to be busy busy busy for a while.  Hopefully I'll squeeze in a few historical dresses when I can...
Posted by Kitty at 23:48 No comments:

The pagoda costume ended up being the mad-panic-job at the end (there's always one).  Initially I was only making the wig, but about halfway through production I was asked if I'd like to make the structural elements of the costume as well, and I couldn't resist... 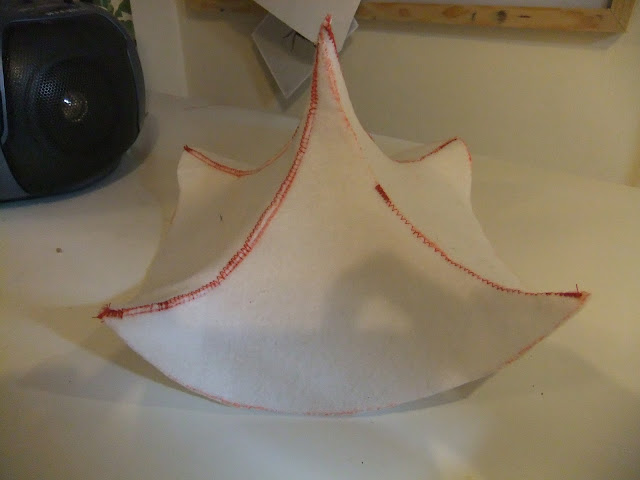 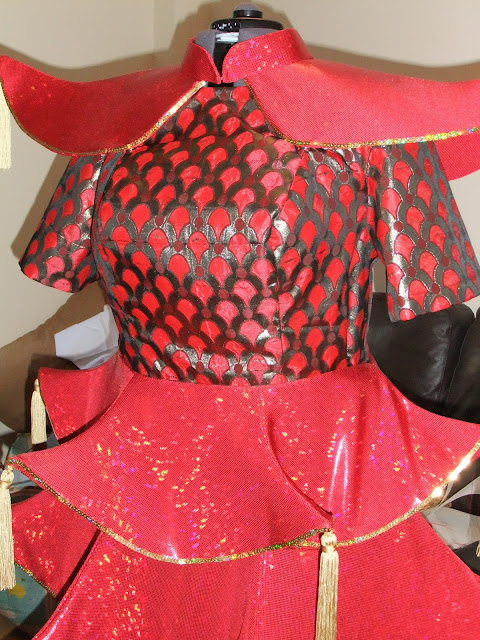 The collar attaches to the dress with two poppers in the front, and one at the CB, as well as a hook and eye fastening at the neck.

The skirt has a hidden waistband with a side seam opening, also fastened with poppers.
Posted by Kitty at 13:58 No comments: