I mentioned the making of this earlier in the year, but never got round to posting photos, so here they are. 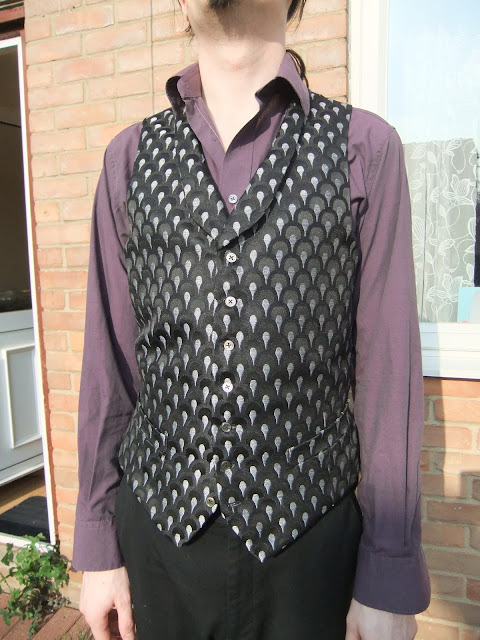 I made this waistcoat for my boyfriend's birthday in April.  It was quite fun to do, and was definitely an exercise in the importance of taking notes.  I made my first waistcoat in my second year at university, and so had to take copious notes and progress photos as part of the unit - thank goodness for that!  Five years down the line and I would have had no idea where to begin if I hadn't had my notes to guide me, especially for those tricksy welt pockets! 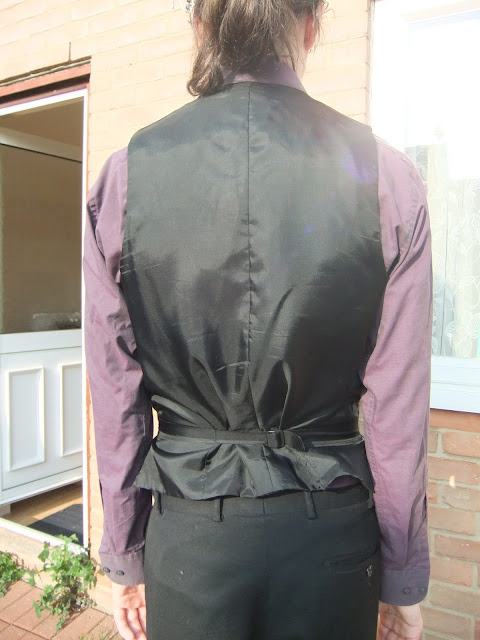 Drafting the pattern was a little disconcerting, as Lars is so long-bodied, and my previous waistcoat had been made for a child, so the completed pattern didn't have much in common with the only other one I had to hand for comparison.

Luckily once made up, it fitted him fine, and he was very happy with it.  I've barely scratched the surface of tailoring, and as I've become more focused on historical womanswear it has fallen by the wayside somewhat.  Hopefully this will be the first of many more tailoring projects to come; once I've gotten a few more 18th and 19th century dresses out of my system.
Posted by Kitty at 22:23 No comments:

The next layer in my 1850s ensemble was the crinoline, which is possibly my favourite part.  I really enjoy making structural pieces, and I was very pleased with the bell shape I was able to achieve here.  I'm indebted to the tutorial by 'the Laced Angel' on how to draft a round hoop skirt.  The method involves drawing out the shape you want, and then scaling up to get the measurements for the hoops.  You can see my workings out below. 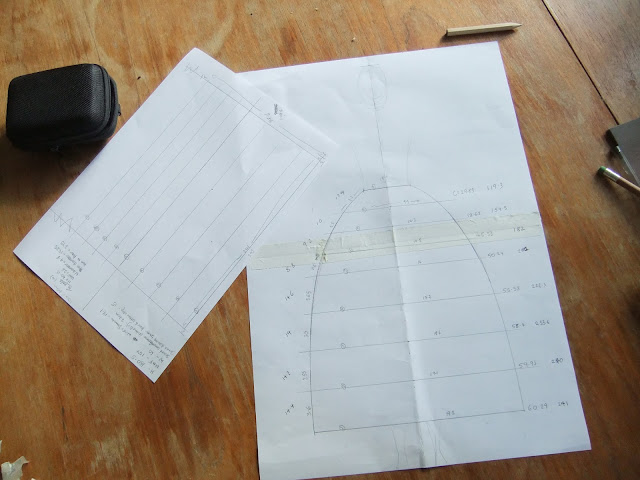 I decided to give it a very modest circumference (241cm for the bottom hoop), as I am quite petite and didn't want it to overwhelm me.  The Ball would also be my first outing in a crinoline so I wanted to play it safe a little bit.  For the next one I'll be more adventurous!

Construction was very simple.  I used narrow gauge steel boning from Vena Cava for the hoops.  I'd bought a 10m roll of plain white cotton at the start of the project from Empee Silks (a massive fabric warehouse in North London) and used it for most of the undergarments, including my chemise, my petticoat, and Becky's petticoat.  To add a splash of colour, I dyed some of it yellow for the crinoline. 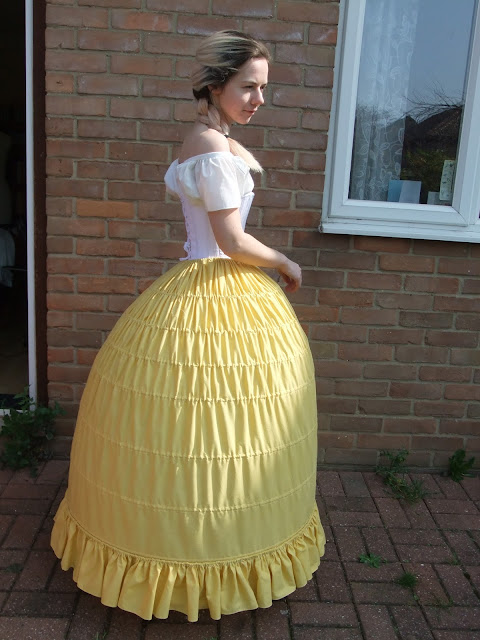 The cotton was just a rectangle of fabric wide enough to take the longest hoop.  I hemmed it and made a channel at the top.  The boning channels were made in cotton tape, applied to the underside of the fabric before sewing up the back seam.  Each hoop was pre-cut to size, slotted through, and secured with a brass joint.  The top is gathered to the waist with another length of cotton tape slotted through the channel.  Finally I gathered a long length of cotton on a piece of cord, and handstitched it to the lowest hoop to create the frill. 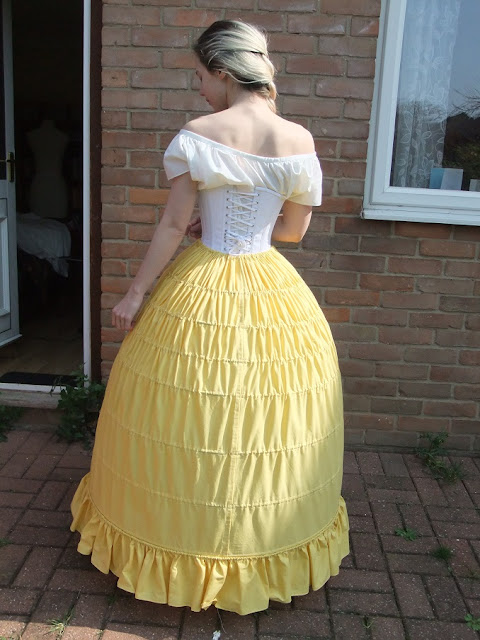 I am really pleased with the gentle bell shape I achieved, and with how easily it all came together. 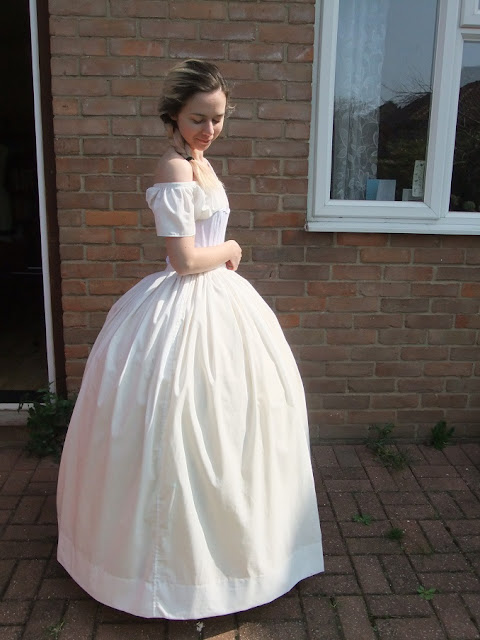 And here it is with my petticoat over the top.  The petticoat was very simple.  Two widths of cotton sewn together with fell seams, and gathered to a waistband with a hook and bar closure.  It was all machine sewn and came together very quickly.
Posted by Kitty at 21:58 No comments: 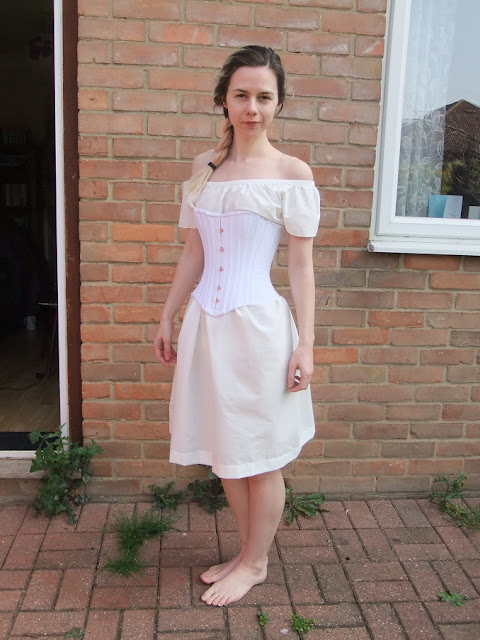 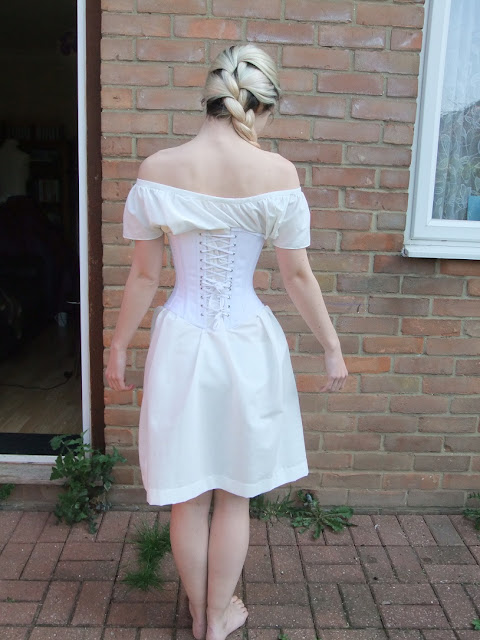 More Victorian Ball posts to come!
Posted by Kitty at 16:00 No comments:

October and November can be very busy months for me, and that's partly due one of my favourite jobs, which is creating wigs for the Dame(s) at the Mercury Theatre in Colchester.  This is my third year running, and it's a great job that's something a bit different from my usual costume work.

I'm currently working on six wigs for Widow Twankey for Aladdin, but today I'll be talking about the Ugly Stepsisters from last year's Cinderella.  As it was two Dames, there were eight wigs in total; four each.

Because of the number of wig changes in the show, each one need to be made as one solid piece that just slots onto the head, with no need for styling, then comes off just as easily.  In previous years they'd used a buckram cap underneath, but were dissatisfied by the buckram distorting from the actor's sweat under the hot lights.  When I was asked to step in,  I discovered a method involving fosshape; a fabric that looks a bit like felt, but when steamed or heated will shrink and stiffen to a fixed shape.

I start by sewing together a cap out of fosshape, then steaming it over a wig block, and trimming the sides to the actor's hairline.  I can then take synthetic hair or cut up ready-made wigs, and sew them directly onto the fosshape cap, building up the style according to the design given.

The trick is to have a wig block that is the right size for the actor that'll be wearing it.  In the first year, by some fluke, the block I had was perfect for the actor's head.  For Cinderella, however, both actors had significantly larger heads so that the test cap I'd made barely went over their ears.  To get round this, I decided to customise two styrofoam heads to the actors' measurements, following the instructions on this video.

Tip:  I marked the hairline on the block twice.  I drew it out in Sharpie once, covered that in sellotape, then drew again.  When steamed, the fosshape picks up the outer pen mark, and so can be trimmed accordingly, but the original marking stays put for the next one.

I paint the fosshape with acrylics before adding the hair.  The hair is a mixture of extensions and ready-made wigs that I chop up and sew on in layers, echoing the growth pattern of natural hair.  Lace front wigs are useful for softening the edge where the front of the wig meets the forehead. 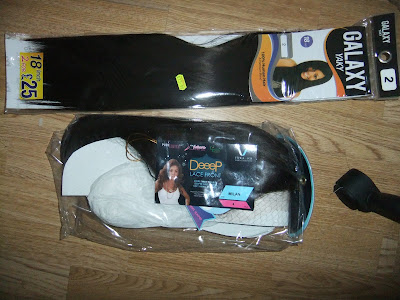 When the hair is securely styled, I coat it in lots of layers of clear spray varnish, to really fix it.  These wigs go through a lot of wear and tear on stage, so it's important that they're up to the challenge!

With the straight dark wigs, you can see that I've added pin curls to the front.  This is because the hairline was still too sharp a contrast at fittings, and needed breaking up. 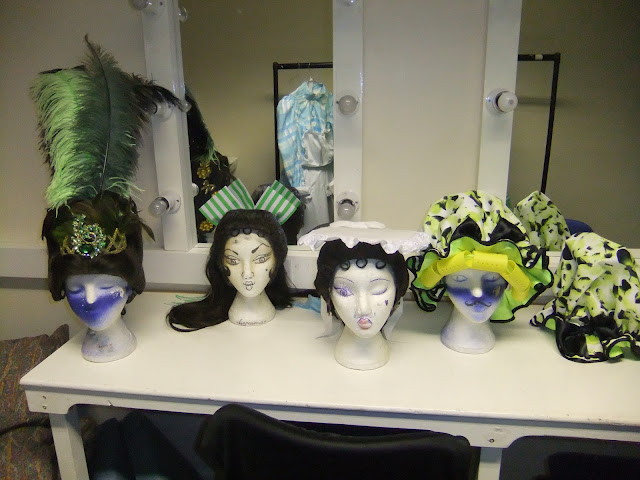 A half up-do with a bow for their everyday look, a maid cap, a mob cap and rollers for the slosh scene (with a spare mob cap to allow for drying times between shows!), and a feathered updo for the ball. 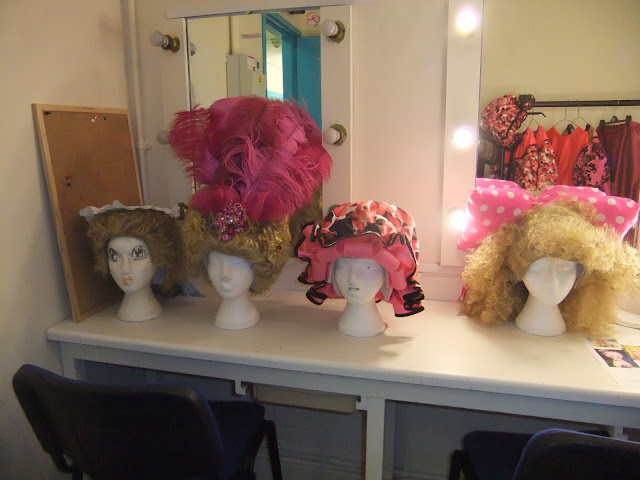 The ball looks have a frame made of millinery wire inside, and the mob caps and rollers are attached to the base with large poppers for switching from show to show.  Unfortunately I'm dependent on the photographer to get photos of them in action and I've only got images of the slosh wigs to show you. 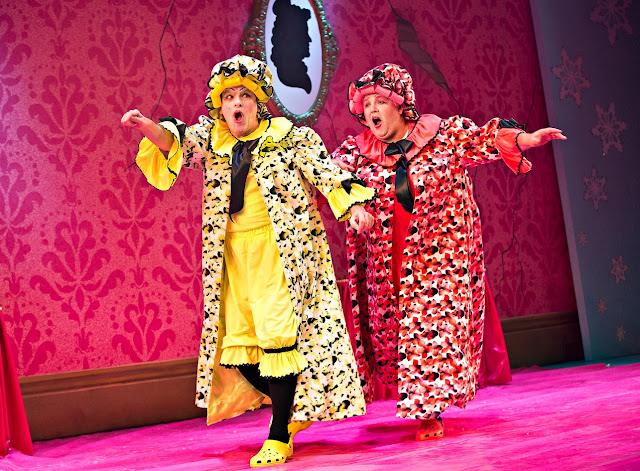 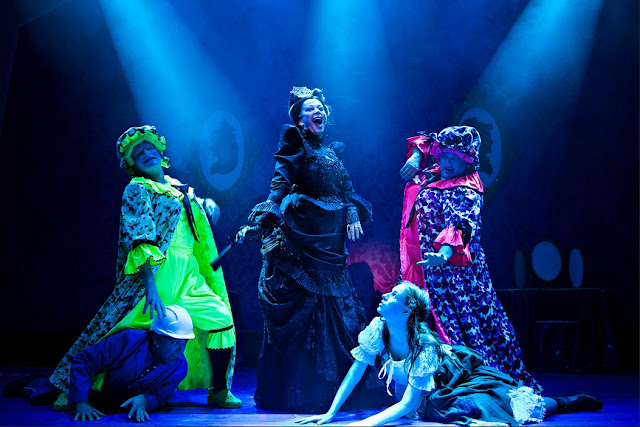 Now, back to work on Aladdin!  I'll be sure to take more making-of photos this time around.