This blog will continue to be horribly neglected until after Hand In (May 15th!), but here's a little preview of how my angler fish is looking lately: 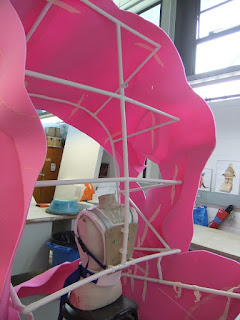 The frame is almost finished, just got to add a couple of extra poles to the front to hold up the lower jaw.  The plastazote fish skull is getting there as well.  Here's my design concept if you need a reminder.  My plan this week is to get them both finished and stuck together (they're just held with masking tape in this photo to check the positioning) and to cut out and add on the ribs and fins too.  Then next week I can add the lure, paint it all and add the teeth too and then it'll be complete!  I'm counting down the days..

Still hard at work on my angler fish costume.  I'm working on the understructure right now, but also having a mild to medium panic (the type where you can't sleep because your heart's beating too fast and your brain is continuously whirling on about how to make this bloody costume) because my budget doesn't cover getting the plastazote I wanted for the outer shell, and I need to get started on it now!

Anyway, digressing for a moment, this project got me thinking today about something one of my tutors said at the end of our first year when we deciding whether to specialise as designers or makers.  A lot of us (including yours truly) were really conflicted.  I adore both, and find that one without the other is nowhere near as gratifying as a project that you get to build up from a germ of an idea to a realised costume all off your own back.  I love designing, but it wouldn't feel right for someone else to make the costume for me.  And likewise, interpretting someone else's vision is fine, but I much prefer exploring my own.  I think a lot of it comes from the way I design, which is very unstructured.  I'll start developing an idea, but then it'll always evolve as I'm making it.  I'd never be able to complete a final design before starting on construction without feeling very constricted by the limits I'd set myself!

But unfortunately that doesn't seem to be the way the costume industry works, and costume degrees have definately changed to reflect this over the past few years.  In Bournemouth (my uni) it used to be that you didn't specialise until 3rd yr, but by the time I started, we had to choose a year earlier.  In Wimbledon you have to choose right from the start!  So you end up doing a degree either wholly in costume design or wholly in costume interpretation.  I suppose it makes sense, as so many jobs are just too big for one person to handle, so obviously you're going to need specialists in the various fields; but then there's the fear of being labelled as just a designer or just a maker, and then finding it increasingly difficult to balance your work load to include both.  That's my fear anyway.  I ended up specialising in making, by the way.  I decided that I'd be able to learn a lot more practical skills from my tutors that way; and therefore be able to confidently create more of my trickier ideas.  It does leave me worrying that I don't have a lot of experience in design though, and I worry that I might be passed over for a design job because of my specialism in making.  Only time will tell.

Anyway, to get back from that mini rant to the point I was making about my tutor's comment.  One of her arguments against people being both a designer and a maker at the same time was that ones prior knowledge of construction would tame the design.  She argued that someone who knew how to make would be constricted by their preconceived ideas of what was possible to make.  A designer with less constructional skill, however, who designs without wondering how it'll be put together, might be able to come up with something new and original that would force their construction team to find innovative ways in which to make it.

At the time I remember thinking this an unfair generalisation, but it still concerned me.  Would my developing skill in construction hinder my more "out there" design concepts?  Was becoming a better maker making me a worse designer?

In a word, no.  And this project has proved that.  If anything, my increasing knowledge has led me to make my designs MORE challenging.  There's no fun in designing something if I already know exactly how to make it, and I adore figuring out new materials and new ways of constructing that I've never tried before.  I've always been an overachiever in all my creative endeavours, and that's a further reason why I wouldn't want to design for someone else to make.  I have ridiculously high expectations of myself, but if someone else was completing the construction side of this project for me it would be unthinkable to expect them to put as much into it as I'm doing, and it would be unfair to ask them.  But I never learn when it comes to giving myself a shit load of work to do!  I've truly jumped in at the deep end with this unit, and as terrifying as it can be, I wouldn't have it any other way.


Anyway, unfortunately I don't have any good progress shots of my fish costume to round off this post with, as it's still very much in pieces, but here's a photo of a ballroom dancing dress I made for my cousin last summer.  That's not her wearing it, my cousin's a bit shorter so it comes to a nicer ankle length hemline on her, I just don't have any photos! 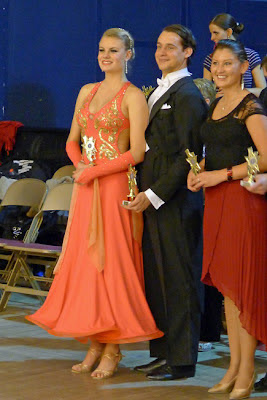 Laterz
Posted by Kitty at 22:13 No comments: