At this point I'm fairly inured to the fact that I'm useless at taking progress photos.  But never mind!

The 2nd Victorian Ball hosted by Prior Attire at the Assembly Rooms in Bath was this Saturday gone, and I think I enjoyed it even more than last year!  Part of that was down to the fact that there were so many familiar faces this time around, as we recognised so many people from the year before, so it was easy (even for an unsociable costumier such as myself) to strike up conversations with people and compliment each other on our fabulous outfits - of which there were many!

Which of course leads me onto what I made.  Once again it was both me and my sister Becky attending, so I needed dresses for both of us.  The unofficial theme of the year was crinolines, but as I'd worn one the year before, I wasn't terribly inspired by that, and decided to ignore it.  Next year's theme is bustles though, which I will probably go for, as I've yet to make a bustle dress for myself, and I also want to rework Becky's blue waterfall gown from last year with a new improved bodice to really compliment the skirt I was so pleased with.

I mentioned before that I have a tendency to lose interest in a project once the basic shape is done, so actually making an effort with trims and finishings is a bit of a challenge for me.  Therefore I purposely tried to push myself this year by giving Becky an 1880s gown, which is from an era where lashings of trimmings were all the rage.

I reused her corset from last year, but decided to make a new flounced petticoat and 'horsehair' tournure (actually stuffed with net) from one of Jean Hunnisett's patterns.  I used stiff organdy for the petticoat flounces and pleats, and found that it's an absolutely brilliant fabric for making really crisp pleats that keep their shape.  The rest of the petticoat was cotton lawn, and the tournure was cotton and tarlatan. 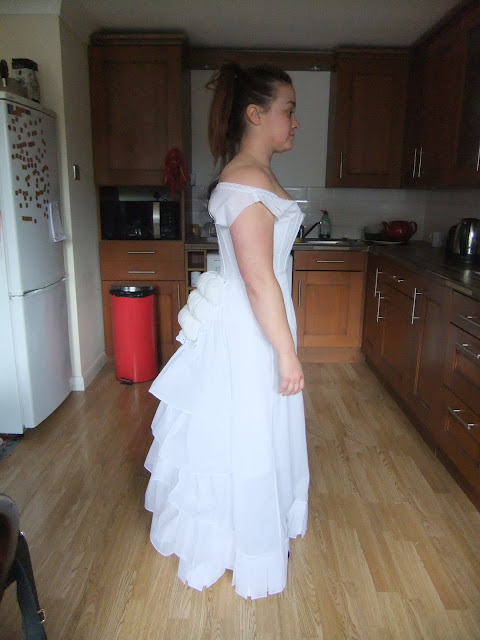 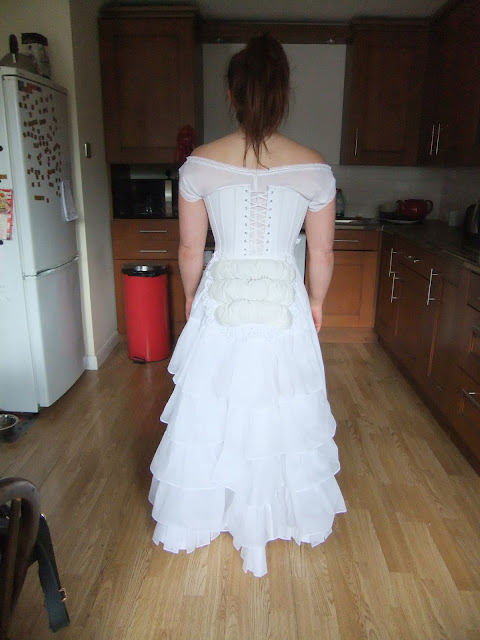 We went shopping together in Shepherd's Bush for Becky's top fabrics.  She picked out a faux taffeta in copper, and we also found a red velvet from the same shop that I thought would go with it really well.  For the design I was inspired by the 'Velvet and Brocaded Gauze Evening Dress' in Frances Grimble's 'Fashions of the Gilded Age Part 2'.  I lifted the pattern for the velvet drapery and panniers directly from the book, and used the bodice pattern as a reference whilst draping her bodice on a dressform myself.

Here you can see some of the alterations I made to the bust darts and back in our first fitting. 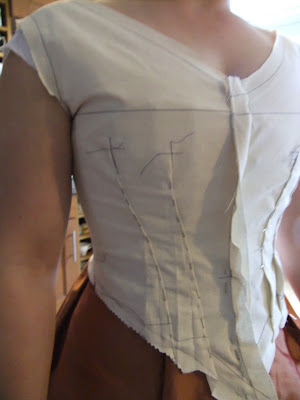 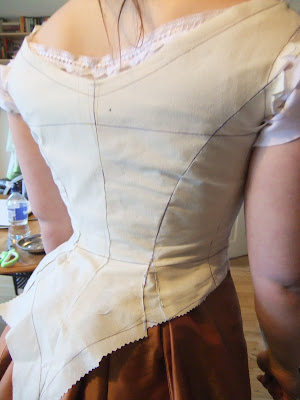 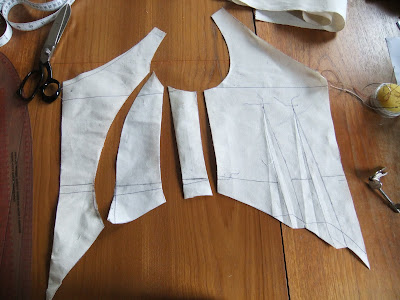 I had some trouble with the underskirt, as the Janet Arnold pattern I'd used seemed to have a lot of extra fabric in the front, as if the hip curve allowance had been placed too far forward, if that makes sense.  I ended up taking it in quite a bit to get a smooth line. 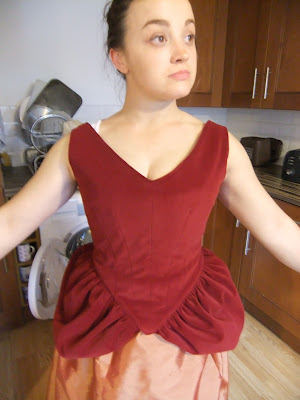 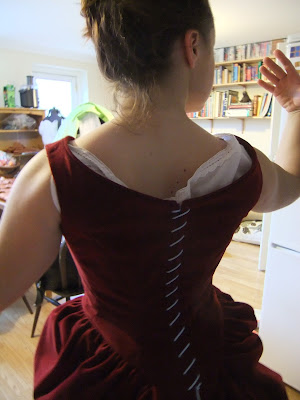 Spiral lacing before I'd bought a matching cord!  This was my first go at hand bound eyelets, and I really liked working on them.  Not only did they look miles better than metal, the hand sewing is also quite pleasant to do in an evening.  I ended up doing hand sewn eyelets on my own bodice as well, even though they wouldn't be seen.
That errant chemise caused some problems on the day as well, and I ended up having to safety pin it down to stop in peeking out all the time.  The underlying problem was that the bodice neckline was too large, so ultimately I'd like to get round to taking it in an inch or so at the CB to stop the gaping.

For my own costume there are even fewer ' Making Of' photos.  I chose an 1890s look inspired mostly by this gown at the Met.  The bodice is a basic foundation made in calico, with the lime green silk draped over the top and secured by hand along the side seams and hemlines. It is lightly boned for structure. 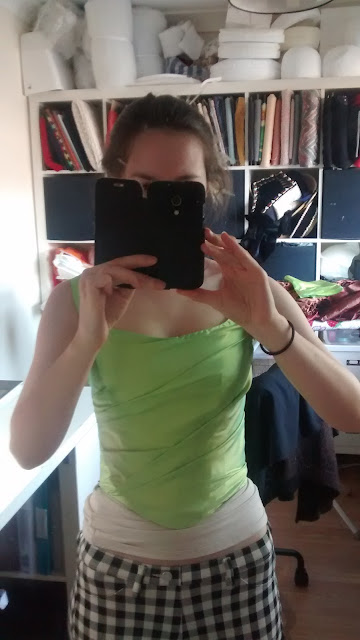 And that's it for now, stay tuned for photos from the Ball itself!
Posted by Kitty at 14:34