I've joined the Historical Sew Monthly group on facebook this year, in the hopes that it'll encourage me to finish and photograph more of my personal projects.  It's not a terribly good start then, although fitting, that I've managed to miss the deadline on January's Procrastination challenge by almost a month!

At the tail end of last year I got very interested in the Italian Renaissance, specifically womanswear from the late 1400s.  While perusing pinterest I stumbled upon the altar paintings of Carlo Crivelli,  and immediately fell in love.  There doesn't seem to be any other documentation of this particular style of dress, so it's difficult to know whether it's entirely accurate, or whether he embellished the look, but I'm determined to recreate something inspired by these gowns.

One of the great things about living in London is that it just so happens that many of these paintings are just a tube ride away, in the National Gallery; so I went to have a look in December.  It's difficult to choose a favourite, but I do love the detail on this one below. 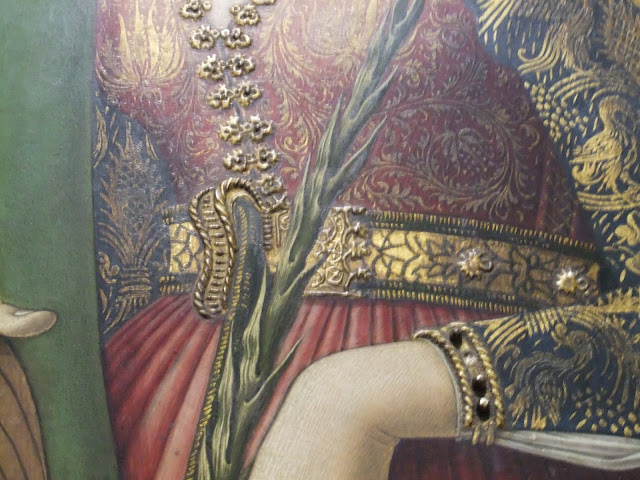 I'm not an embroiderer though, so all that gold work will involve a bit of fudging if I want to recreate something similar. 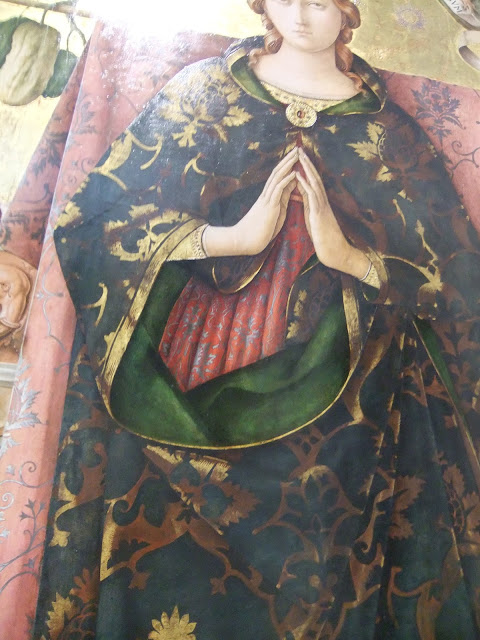 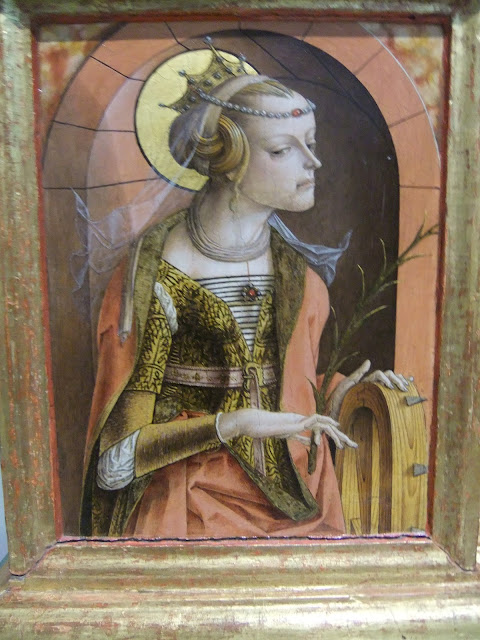 For now though, I've got the camicia (the shift worn underneath) finished.  I started this in December, neglected it over Christmas, made a stab at finishing in January, and finally got the neckline trim sewn on in February.  It doesn't look like much (and the matching background doesn't help, I know), but I think it's the first thing I've made that's completely handsewn, and I followed the instructions in Patterns of Fashion 4 in order to make the construction as historically accurate as possible so I'm quite pleased with it.  I even used linen thread, and hunted out the finest linen fabric I could find (even if the weave is a bit open for my liking). 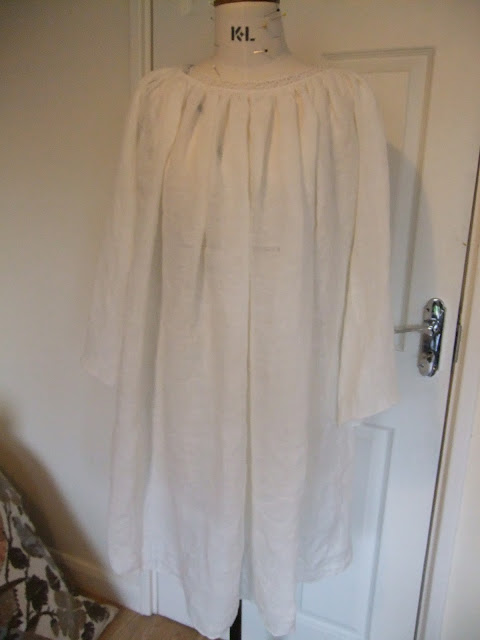 There are no patterns (that I can find) of pre 1500 camicias, as there's so little extant clothing from that time.  My usual periods are the 18th/19th centuries, and there's a wealth of information available on construction, as there are so many existing garments to study.  With this project, I basically just have a few paintings, and educated guesswork based on what still survives from the following century.  I therefore made use of the 16th century patterns from Patterns of Fashion 4, adapting the neckline, and narrowing the sleeves.


The Challenge: January Procrastination
Material: Linen
Pattern: Adapted from Patterns of Fashion 4.
Year: 1475-1500
Notions: Linen thread
How historically accurate is it? As accurate as possible, given the lack of surviving camicias to study.  Completely hand sewn using period techniques.  Lets say 95%
Hours to complete:  If I'd done it all at once, probably 2-3 days.
First worn:  Just at home to check fit.  It's a bit too transparent for modelling photos though.
Total cost: I can't remember what I paid for the linen.  It'll be under £20 altogether.

Moving on to the dress itself will definitely be out of my comfort zone, but I'm excited to get started... just as soon as I've got this years' Victorian ball gowns out of the way - that deadline is fast approaching!
Posted by Kitty at 12:39