I started this blog entry last year when working on Dick Whittington.  This year I'm using almost identical techniques to create rabbits, squirrels and mice costumes for Snow White, so I thought it was about time I got around to finishing and publishing this!

Our King Rat broke the panto mould by not having any distinguishing ratty features; the closest to that is furry cuffs and lapels on his jacket.  Instead he was the 'Ratty King', with a band of rat minions.  The rat troupe consisted of 2 adult performers and 8 ensemble (played by children aged 8-16); meaning 10 costumes altogether.


I was given (after hinting broadly about how much I wanted to do it) the task of figuring out how to make their heads and tails.
The heads sit fairly high on the head, so I came up with a scheme of mounting them on hard hat innards.  To create the head shape I decided to have a go at using varaform for the first time.  This is an open weave thermoplastic that becomes mouldable and sticky when heated.  To create a mould I layered bubblewrap over a wig block; securing it in place with packaging tape.

The guides I found online suggested laying strips in a tray of just boiled water, then pressing them over the mould when they've softened.  I found that, in practise, the strips stiffened again within seconds of leaving the water, thus not giving me enough moulding time, and it was annoying to have to constantly boil more water to replace it as it cooled.  I quickly scrapped that method and turned on the steam iron.

A good industrial steam iron was more efficient, as you can direct the steam as you go; reheating areas where it needs it more, but I eventually found a third method even simpler; a hairdryer.  Once again it was much easier to direct the heat, and to turn it on and off as I needed it, rather than waiting for a hot water tank to heat up. 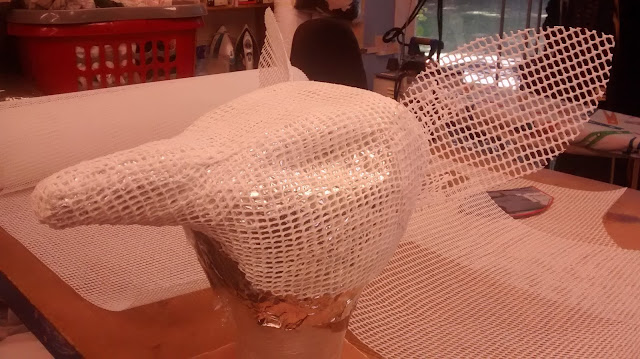 Once the varaform was cooled I could take it off the mould.  As there were undercuts in the mould this meant cutting a slit on the underside of the nose and partway up the CB before I was able to shift the cast off.  I could then patch up those slits with more varaform, squashing the cut edges together with my fingers where they overlap to strengthen the bond.

The varaform attached to the hard hat innards with cable ties.  These are threaded through the holes in the varaform mesh.  Once secured, I could also trim the excess varaform away.

I attached all fabrics with hot glue.  The teeth are made from two pieces of foam sandwiching a loop of wire that runs through the varaform mesh to secure them in place.  Whiskers are lengths of fishing line.

I made the tails from pipe insulating tubes.  These are hollow in the middle, with a slit cut along the side.  I started by tapering one end to a point to create the tip of the tail.  I then fed a length of wire along the slit, and attached cotton tape over the top to hold it.  I attached a second length of cotton tape along the other side, then made cuts 2" apart along both the top and the bottom of the tube and bent it into a suitably tail-like S shape.  I covered each tail with a double layer of pink lycra and painted into them, emphasizing the segmentation with some watered down acrylic.

Stay tuned for more furry rodent costumes from this year's panto!  Funny how one can sometimes stumble into a specialism...
Posted by Kitty at 21:58