I actually finished painting the set last thursday, but didn't get a chance to take any photos until today.  The poor patient guy on security at the Guildhall was literally turning the lights out as I was dabbing the final details in on thursday evening, so it wasn't really the opportune moment to stop for a bit of camera action.  Luckily, I had to head down today to drop off the leather buskins I made for the character of Jason (which, typically, I forgot to take a photo of - I'm useless at this!), so that gave me ample time to go down to the amphitheatre to take some photos.

I didn't go into very much detail about the project in my previous post, but for anyone unfamiliar with the original Greek play, here's a rundown.  It's about the title character, Medea, who is married to Jason (of Argonauts fame).  Jason decides to remarry, and Medea (being a little put out by this) naturally reacts by sending his fiance a poisoned robe, killing her own children and escaping in a suitably spectacular fashion in the dragon chariot of the sun god Helios.
I'd originally signed on to help out my friend Mel, who designed the costumes, but, since they needed someone else to design and paint the backdrop, I stepped in.  It's actually the first time I've painted anything in this scale, so it was definitely an educating experience.  The task was to create the outside of Jason's palace, with central doors that characters could enter and exit through.
I relied pretty heavily on wall paintings from Pompeii and Herculaneum for the colour scheme and layout of my painting: 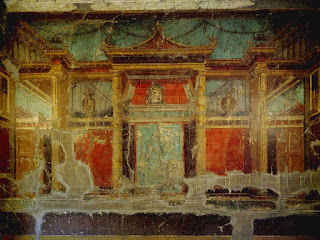 Once I'd put a scale drawing together I popped down to B&Q to dither about in the paint section for awhile, then got to work!  It took about 8 full days to get it all completed, and overall I'm really happy with the outcome.  I think I'm most chuffed with how well the 'marbled' texture turned out on the columns either side of the door. The perfectionist in me would have wanted to do something more with the brown panel along the lower edge (shading or texturing of some description) but unfortunately there wasn't enough time, what with other projects all crowding for attention at the same time!  Nevermind, I'm always my worst critic.

The play opens this wednesday (the 13th) and I'll be going to see my handy work in action at Sunday's matinee performance!  For more info on the staging of the play (the first time the Roman Amphitheatre has been used for this purpose since, well, Roman times!) visit Medea in the Amphitheatre.

In other news, David Bowie's new album came out today and it is BRILLIANT.  Buy it. Now.